Last September, as Lucent faced the need to spend cash on retiree health benefits for the first time, the company chose to cut them. It eliminated Medicare “part B” and dental coverage, death benefits, and spousal benefits for management retirees who made more than $87,700 a year. The effect was to rescind some of the health coverage Lucent had offered people in 2001 to get them to retire early.”

…In his speech, Bush also renewed his criticism of European nations for refusing to accept genetically modified foods and said the ban was contributing to famine in Africa. “Acting on unfounded, unscientific fears, many European governments have blocked the import of all new biotech crops,” he said. “Because of these artificial obstacles, many African nations avoid investing in biotechnology, worried that their products will be shut out of important European markets.” Last week, a final round of negotiations between the United States and the European Union failed and the administration announced it would ask the World Trade Organization to overturn Europe’s ban on new biotech foods and other goods. “For the sake of a continent threatened by famine, I urge the European governments to end their opposition to biotechnology. We should encourage the spread of safe, effective biotechnology to win the fight against global hunger,” Bush said. 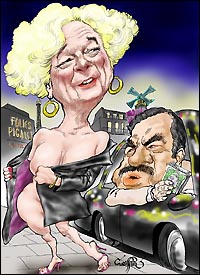